Imagine my delight when I received an e-mail a couple of weeks ago asking me if I would be interested in reviewing some children magazines from Bayard Press.

Having grown up in France, I am very familiar with Bayard Press publications. From the time I could read until I was 16, I had a subscription to some of their magazines. I remember my delight whenever it arrived. I would rip the plastic wrapper apart and get stuck in. The stories were always interesting, sometimes based on legends or historical events. Their other articles on nature, world events etc were always informative. So I jumped at the chance, hoping that their English publications would live up to what I remembered off the french ones.

When people think of children magazines, they think of cheap plastic toys that break within minutes of being opened and not very profound comics with well known characters. I have to admit I am not a big fan of them. I buy them because Marie loves to read and she will read anything that she can find. But I think that now, she has outgrown most of the magazines I can find. And I refuse to get her any of those tweenagers magazines that come with war paint make up or anything like that.

We received 3 magazines: Story box (aimed at 3 to 6 years old), Adventure Box (aimed at 6 to 9 years old) and Discovery Box (9 to 12 years old). Upon opening the envelope, I was delighted to see that the format had not changed much from what I remembered. I enlisted Marie's help to see what she thought of them. 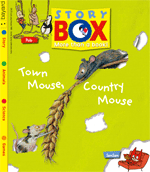 We started off with Story Box. Although aimed at children slightly below Marie's age and reading level (although she is only 7, she is on the penultimate Harry Potter book and a real book worm), she really enjoyed it. It contains a book length, beautifully illustrated story called 'A Donkey for Two'. It is based on a common Arabic legend and it's moral pretty much reads that no matter what you do, people will always have an opinion and you shouldn't let it bother you. Marie particularly enjoyed learning about sloths in the Nature article, and 'What happens to the rubbish we throw out' especially since this year she has learned a lot about the environment in school. She also enjoyed the couple of pages of games. So, despite being for a younger audience, it gets a thumbs up from Marie. 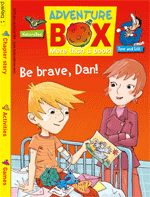 We then moved onto Adventure Box, which is aimed at children around Marie's age (6-9). It contained a 44 page chapter story, based on the Greek mythology legend of Atalanta. The story was well written and easy to understand. There also were a few footnotes explaining certain aspects of Ancient Greek life such as soothsayers (or oracles) and gyneaceums. She particularly enjoyed the feature on buttercups in which she learnt the proper names for the different parts of the flower and also that you should not put a buttercup in your mouth and why. She had a good laugh at the Tom and Lily comic. I was gladly surprised to see that this particular comic was still part of the magazine as I used to love it (you don't change a winning team!). We played the games together. She also enjoyed the last comic, Ariol.

The last magazine we received is called Discovery Box and is aimed at children from 9 to 12 years old. In this one, the focus shifts more onto science, nature and history rather than getting your children to enjoy reading. Marie read it and enjoyed it however, I believe, that she did not understand it all since it is for older kids. I read it too and found it very interesting. Once again, the format is the same from what I remember. I found it a great source of information and help for homework when I was in school especially when it came to projects. This magazine offers insight into the world of animals with beautiful pictures and great information. It tackles science in an exciting way and brings it to life with experiments. History features through a picture story followed by a few illustrated pages of information. It also offers easy recipes for children, insight into sport, and various other topics.

So I am really happy that the 3 magazines we received lived up to what I remembered of the French ones. Some people might say that I am trying to relive my childhood, but I am seriously considering subscribing to this one. For me, it ticks all the boxes when it comes to children's magazines. They all are entertaining, informative and educational.

To get an idea of what the magazines look like, or to subscribe, just visit the Bayard Press website. Subscriptions for a year (10 issues) cost £39 (UK only), or 65 euros for other European countries.
Posted by Foodie Mummy at 1:47 PM

Pleased to meet you.

Foodie Mummy
SAHM mum to 2 girls aged 2.5 and 8 and a baby boy, French foodie in Ireland.

Why don't you visit my friends too.

Why don't you show me some love?

People who stop by.

You can read me here too!

Want to read more? Here are a few oldies: